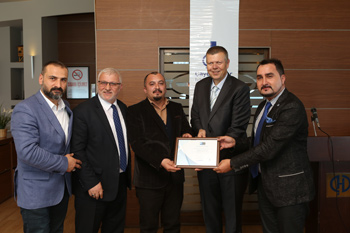 Çayeli Bakır İşletmeleri (ÇBİ) supports the development of business partners that it has obtained services from, by audits through an independent audit company. As a result of the audits conducted among the business partner contractor companies of Çayeli Bakır; the Çamsar Madencilik Ltd. Company, which was deemed to be deserving of the “A Class Contractor” award in the ‘’Safesupplier 2015 Contractor of the Year’’ evaluation, was presented the certificate in a ceremony.

The Çayeli Bakır İşletmeleri, which pays careful attention to increasing local capacity, makes important investments in the development of contractor companies that services are obtained from. The most recent result of the work conducted in this scope was Çamsar Madencilik Ltd. Şti. achieving an “A class Contractor” award in the ‘’Safe Supplier 2015 – Contractor of the Year’’ category. The certificate and award that were presented for the first time this year were accepted on behalf of Çamsar Madencilik by Ali Arif Kaya from Çayeli Bakır İşletmeleri General Manager Iain Anderson at the ceremony that took place on April 17, 2016. The ceremony was attended by Madenli Mayor Necip Yazıcı and the Çayeli Bakır administrative staff.

In the scope of the Contractor Management System conducted by the company through the independent audit firm S&Q Mart for the past 2 years, local companies are assessed on Health, Safety and Environmental subjects, their management system performance is developed and they are subjected to constant and effective independent inspections by 3rd parties. 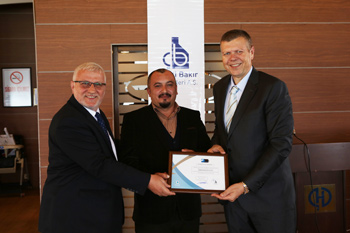 We are developing together with our business partners
Çayeli Bakır İşletmeleri General Manager Iain Anderson, who spoke at the certificate ceremony, drew attention to the important responsibility of employer companies in the development of their contractors and suppliers. Anderson pointed out that as the Çayeli Bakır İşletmeleri they place great importance on safe mining and added:
“At Çayeli Bakır, we pay attention to raising the standard of both our employees and our contractors and suppliers. This is one of our management goals. I congratulate Çamsar Madencilik for coming a long way in line with this goal.”
In the speech by company manager Ali Arif Kaya, who accepted the award on behalf of Çamsar Madencilik Ltd. Şti, he thanked the Çayeli Bakır İşletmeleri for their great contributions to the development of the sector. The independent audit company S&Q Mart authority Levent Barlan, who provided information about the project, emphasized the benefits of the project for Çayeli Bakır and the sector. Barlan explained that Çayeli Bakır’s starting audits with this pilot project for the first time, was important and would create great awareness in the sector to establish a Work Health and Safety Culture among contractors.

What subjects did the audit cover?
In the scope of the Contractor Management System, Çayeli Bakır İşletmeleri audits the local companies it obtains services from in many different subjects. The main goals of the program are to make companies that are the subject of the audits more compliant with legal regulations, to protect the legal rights of employees, improve Safety, Health and Environment competences and to raise standards. In this scope the companies within the Contractor Management System are subjected to inspection in terms of safety, health and environment aspects by S&Q Mart through site audits with and without prior notification. Companies are divided into categories like E, D, B, C and A class with system scoring and they gain points according to each positive change to rise to the A level.