News
Beekeepers have set up a "Development Cooperative" in Çayeli-Madenli 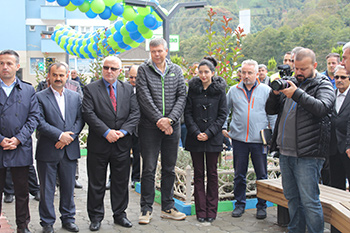 Beekeepers, who operate in the Madenli region of Rize, have come together and set up the “Büyükdere Valley Agricultural Development Cooperative”. The beekeepers, who are to conduct sales and marketing activities in the region with this initiative, have also taken the first step branding in the region of Madenli, in this way.

Necip Yazıcı, the Mayor of the Madenli Municipality, Hamza Saruhan, the Mayor of the Büyükköy Municipality, İshak Karahan, the Provincial Head of the Çayeli District of the Justice and Development Party and Iain Anderson, the General Manager of Çayeli Bakır İşletmeleri (ÇBI) took part in the opening ceremony of the cooperative. Hüseyin Çalışkan, the President of the Büyükdere Valley Agricultural Development Cooperative, who spoke at the opening ceremony, said that they had begun the process of branding, by concentrating on sales and marketing activities in the coming period. 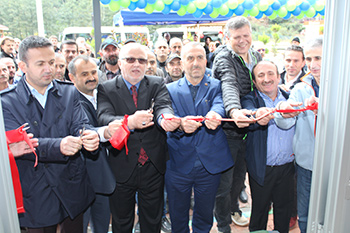 An Unbelievable Fall from 70% to 5% in the Deaths of Bees
Hüseyin Çalışkan, who thanked Çayeli Bakır İşletmeleri (ÇBI) for the support it has been giving to the beekeepers in the region through the “Community Development Programme”, since 2014, said, “the ‘Beekeeping Project’ brought to life by Çayeli Bakır İşletmeleri in 2014, has made a great contribution to the development of our region. The deaths of bees, which were at around 70% before the project, have fallen to 5% following the training which has been provided.”

Close to 100 Beekeepers Have Been Supported with an Investment of 800.000 TL
On the other hand, Necip Yazıcı, the Mayor of the Madenli Municipality, said, “Close to 100 beekeepers have been supported as of the end of 2016, as a result of the 800 thousand liras investment in our region since 2014. Correct information has been relayed to the beekeepers in our region through the experts who have been employed, regular consultancy services have been provided to the beekeepers and practical training has been given at the hives.”

Iain Anderson, the General Manager of ÇBI, said that the “Beekeeping Project” was of special importance within the framework of the support they were providing for the social development of the region, and that this was a brand new development movement. He said that the leadership of the Beekeeping Expert Yavuz Şahin, who was providing scientific and practical expertise to the beekeepers of the region, under the leadership of ÇBI, had played a big role in the striking success achieved in the Beekeeping Project.