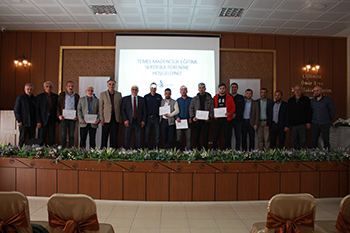 The “Fundamental Mining Training” programme, which Çayeli Bakır has been conducting with an awareness of its social responsibility, and which was organised for the 8th time this year, has been concluded successfully. Those who took part in the training on the subjects of First Aid in Mining, Lifting – Loading, Work Trucks, Mechanised Metal Mining and Maintenance earned the right to obtain certificates.

The 8th “Fundamental Mining Training”, which is among the projects carried out by Çayeli Bakır, directed at providing a vocation for the residents of the town of Madenli, has been completed. 14 more people earned the right to obtain certificates at the end of the 3 month training, in the fields of first aid, platforms, mechanised metal mining and the maintenance of workplace machinery and the use of trucks.

Prof. Dr. Osman Karamustafa, a lecturer at Recep Tayyip Erdoğan University and Chairman of the Çayeli Bakır Community Advisory Committee, stated that one of the recommendations of the Community Advisory Committee was that these types of training courses be provided, and said that they had seen that Çayeli Bakır had taken on the mission of training in mining and they hoped that this would continue.

On the other hand, Necip Yazıcı, the Mayor of the Municipality of Madenli, stated that the most important contribution made by Çayeli Bakır to the region was professional competence, and added that it was much easier for the individuals who obtained certificates to find employment here and in other regions and that this made them very happy.

Murat Güreşçi, the Acting General Manager of Çayeli Bakır, who stated that they had continued their activities with an awareness of their social responsibilities, from the day they were formed, said, “We are experiencing the joy of having successfully completed the ‘Fundamental Mining Training’, which was conducted for the 8th time this year, with the aim of providing vocations. We believe that with this training, the improvement of the skills of our neighbours, and in particularly our youngsters, and their entry into working life will add great value to our region.”

86 individuals have acquired vocational licenses in ‘Fundamental Mining’ in the training programmes which have been organised until today, with 79 percent of those who participated in the training being employed in the mining sector – primarily at Çayeli Bakır.