News
Çayeli Bakır is sponsoring the Design and Skill Workshop 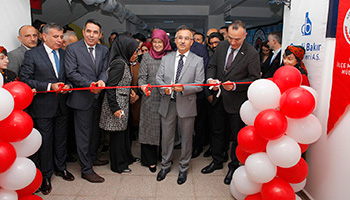 Çayeli Bakır, an underground mining operation of Turkey, has become the sponsor for the Design and Skill Workshop opened in the Yamantürk Middleschool.

The opening ceremony of the project featured in the Ministry of Education’s 2023 Vision Pledge was attended by the Governor of Rize, the Local Administrator of Çayeli, the Çayeli Mayor, the District Ministry of Education Representative, District Police Chief, District Gendarmerie Commander, the General Manager of Çayeli Bakır, Local Administration Representatives and School Principles. 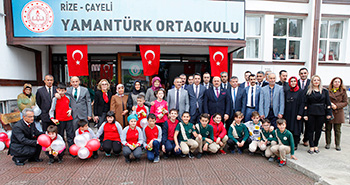 Çayeli Bakır continues to provide support for other projects being realized in Rize in addition to its own social responsibility projects. An exemplary underground mining company of Turkey, Çayeli Bakır became the sponsor for the Design and Skill Workshop opened in the Yamantürk Middle School. The construction and renovation of the workshop took place under the sponsorship of Çayeli Bakır. The opening of the workshop brought to life by the Çayeli District Ministry of Education Directorate was attended by Rize Governor Kemal Çeber, Çayeli Local Administrator Mehmet Öztürk, Çayeli Mayor İsmail Hakkı Çiftçi, District Police Chief Adnan Çarıkçı, District Gendarmerie Commander Çetin Öztürk, Distric Ministry of Education Director Hüseyin Şahin, Çayeli Bakır General Manager Murat Güreşçi and the local Administration Representatives and students. 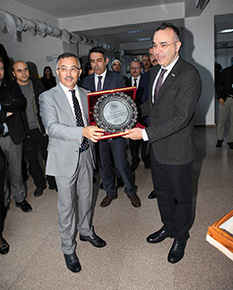 The Design and Skill Workshop, which is among the projects in the Ministry of Education’s Vision for 2023 Pledge, was established to help children develop artistic skills and creativity. This workshop, open to all students of the Yamantürk Middle School, will feature a ‘Ceramic Workshop’, a ‘Wood and Handcrafts Workshop’, a ‘Traditional Turkish Arts Workshop’ and a ‘Visual Arts Workshop’ station. Students will use clay to make models and decorative items in the ceramics workshop and have the opportunity to design various wood objects in the wood and handcrafts workshop. In the Traditional Turkish Arts workshop students will be able to learn about calligraphy, miniature art, ebru and string art; and in the visual arts workshop students will be given advice art and creativity.

Rize Governor Kemal Çeber, who spoke at the opening, thanked the Çayeli Bakır Company for their support and said “We are pleased to see that Çayeli Bakır has offered their support for this project as they have in many social projects, we are grateful for their valued support”. Çayeli Bakır General Manager Murat Güreşçi said “As Çayeli Bakır we are proud to be a part of such a wonderful and meaningful project. We hope students will be able to develop their skills in this workshop so they can achieve even greater success in the future”.