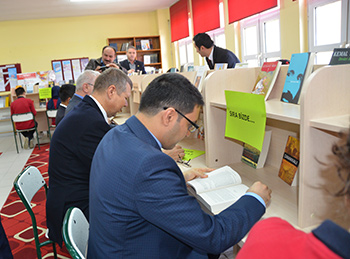 Çayeli Bakır İşletmeleri, which supports the ‘Project of Qualification of Education in Rize (RENK)’ brought to life under the leadership of Rize Directorate of Education, donated books to the Çayeli IMKB High School, during the ceremony held on 5 March, Thursday. It was emphasized at the book distribution ceremony, which was held with the participation of Çayeli Governor Turgay Ünsal, Madenli Mayor Necip Yazıcı, Çayeli Bakır İşletmeleri General Manager Iain Anderson and school principals, that with the project, it was aimed to increase the success of the youth in education and to assist them in acquiring the habit of reading.

Books were donated to the Çayeli IMKB High School with the ceremony held on 5 March within the scope of the RENK Project, which is supported by Çayeli Bakır İşletmeleri. Çayeli Governor Turgay Ünsal, Madenli Mayor Necip Yazıcı, and Çayeli Bakır İşletmeleri General Manager Iain Anderson have read books together with the students during the reading time held following the distribution of the books, which were embraced by the students with great enthusiasm.

Çayeli Governor Ünsal thanked to the officials of Çayeli Bakır İşletmeleri during the book distribution ceremony for the support they provided by donating 3000 books.